(3) After despair, many hopes flourish, just as after darkness, thousands of suns open and start to shine.

(4) In the future there will be banking by “mental telepathy”, which will enable you to give instructions to your bank via “thought waves”.

(6) When sadness comes, just sit by the side and look at…

Why is the Jamaat-ud-Dawa not banned in India as yet under the Unlawful Activities Prevention Act? The Jamaat-ud-Dawa figures in the list of organizations listed in the schedule to the United Nations Prevention and Suppression of Terrorism Order of 2007. While this automatically imposes a ban in India, the question is whether this is enough and doesn’t India need to ban it under the UAPA as this would give the police officials more power to act?Read more: 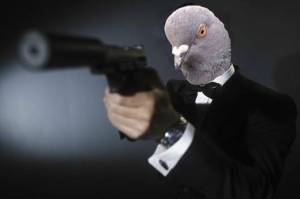 The pigeon from Pakistan may be a racer bird after all. The pigeon which was found in Pathankot in Punjab was detained after some suspicious transcripts were found written on its wing.

It may be a racer pigeon after all the deputy inspector general of police of Pathankot informed while also assuring that the bird is being fed well. The bird now faces two possibilities- if found guilty investigations will continue to trace down the persons who sent the bird over. In case it is found to be innocent, the bird will have a good life in India. The police in Pathankot have been burning the mid night oil to find out whether this bird is a spy or a racer. All evidence so far suggest that the bird is a racer and there is not a single indication to show that it could be a spy from Pakistan. Read More: